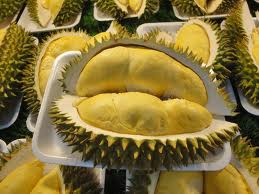 One of its own kinds, Durian fruit is delicious, soft, succulent and very popular for its unique characteristics. Durian is widely revered as the "King of Fruits" in the South-East Asian countries.

The tree is tropical in origin and belongs to the genus Durio, family of Malvaceae; a large family of plant species which also include hibiscus, okra, etc. It is botanically known as Durio zibethinus.

The fruit is distinctive for its large size, unique odor, and formidable thorn-covered husk. It can reach up to 30 cm (12 in) long and 15 cm (6 in) in diameter, and typically weighs one to four kilograms (two to seven lb). In shape, it varies from round to oblong; color of its husk (rind) is green with brown; and its flesh features creamy-yellow to saffron color depending upon the species.

The flesh or pulp can be consumed at various stages of ripeness, and is used as flavor base in a wide variety of culinary and sweet preparations in Southeast Asian cuisines. Durian seeds are small, round to oval shape and appear like jackfruit seeds. Many discard them, though they can be eaten after boiled thoroughly. The seeds feature a bland taste akin to jackfruit seeds.

Edible flesh emits a distinctive odor which can be described as strong and penetrating even when the husk is intact; this unusual stinky flavor and intense odor of the fruit have prompted many people to express diverse and peculiar opinions ranging from deep appreciation to disgust about durian. 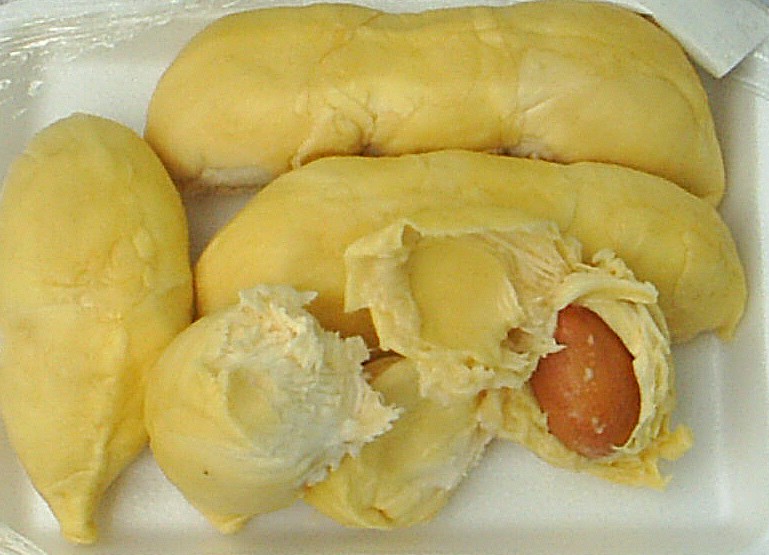 Harvest season: All year round